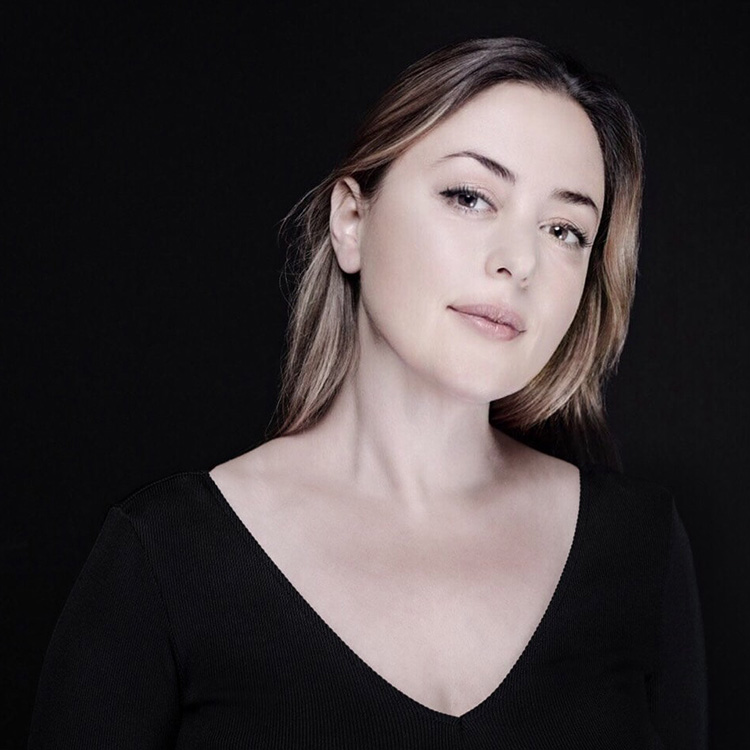 Through an illustrious career being equal parts creator and connector, composer Paola Prestini is known both for her “otherworldly…outright gorgeous” music (The New York Times), as well as the “visionary-in-chief” (Time Out New York)and Co-Founder/Artistic Director of the non-profit music organization National Sawdust. As the Wall Street Journal says, many recognize Prestini for “pushing the boundaries of classical music through collaborations.” Over 25 large scale artistic works are the result of Prestini joining forces with conservationists, poets, virtual reality film directors, astrophysicists, and puppeteers. Her independent streak was forged by creating her own multimedia visions during her early days with VisionIntoArt, the collective she co-founded while at the Juilliard School. Now, she balances co-creating independent dream projects with a stream of unique commissions completing her mission to keep her curiosity and learning a constant and evolving force. The values and processes in her daily work as an artist are at the heart of the regenerative systems she has put in place at National Sawdust.

For her efforts, she has made a considerable imprint on the artistic ecosystem: her accolades include being named as one of the “Top 100 Composers in the World” (NPR), one of the “Top 30 Professionals of the Year” (Musical America), one of the “Top 35 Female Composers in Classical Music” (The Washington Post), and Brooklyn Magazine’s 2019 list of “influencers of Brooklyn culture…in perpetuity” alongside household names like Chuck Schumer and Spike Lee. Prestini’s music has been commissioned by the Brooklyn Academy of Music, the Barbican Centre, Carnegie Hall, the Choir of Trinity Wall Street, the Kennedy Center, The Los Angeles Philharmonic, The Los Angeles Opera, and The New York Philharmonic, among others.

Prestini is particularly known for her command of multimedia and collaboration, with works such as the Hubble Cantata, a live musical performance which currently stands as the largest shared virtual reality experience to date, and Aging Magician, a combination opera-theater work with puppetry and instrument design for string quartet and chorus which continues its run of performances at San Diego Opera this season.

Currently, she is immersed in multiple new operas, including the grand opera Edward Tulane for Minnesota Opera, Sensorium Ex for the Atlanta Opera and Beth Morrison Projects which is a deep dive into what it means to have a voice and lies at the intersection of disability, artificial intelligence, and community impact (for which she received a Ford Foundation grant), Untitled, a monodrama inspired by the work of Cindy Sherman, and Old Man and the Sea for Carolina Performing Arts and Arizona State University. Other works include The Red Book, a string quartet for the Thalea Quartet commissioned by Caramoor, a new work for the New York Philharmonic’s Project 19 featuring Lucy Dhegrae, Hindsight, a piano concerto for Lara Downes touring Oregon Bach Festival, Ravinia, the Cabrillo Festival, and Louisville Orchestra, and a new piano concerto for Awadagin Pratt and A Far Cry.

Recent highlights include the chamber opera Silent Light commissioned by Banff’s Opera in the 21st Century; the grand opera Gilgamesh for Arts Emerson at the Cutler Majestic; the Labyrinth Installation Concertos, performed at the Isabella Gardner Museum and commissioned by the Krannert Center; The Hubble Cantata performed at Bric’s Celebrate Brooklyn, The Cannes Film Festival, the Kennedy Center, and Los Angeles Opera; the opera-theater work Aging Magician, for the Brooklyn Youth Chorus and the Attacca Quartet commissioned by the Walker Art Center and Krannert Center with performances at ASU Gammage and the New Victory Theater; the choral installation Epiphany performed at BAM’s Next Wave Festival by the Young People’s Chorus of NYC; and The Colorado, an eco/film cantata performed at the Metropolitan Museum of Art, Houston’s Da Camera series, Stanford Live and the Kennedy Center for a Roomful of Teeth, Glenn Kotche and Jeffrey Zeigler which can now be seen on PBS.

As part of her commitment to equity and mentoring the next generation of musical artists, she started the Hildegard Competition, for emerging female, trans, and non-binary composers, and the Blueprint Fellowship in partnership with the Juilliard School and the composition department in collaboration with National Sawdust. Prestini is a 2021 Paul Fromm Resident in Composition at the American Academy of Rome and a 2021 Sundance Interdisciplinary fellow and her honors include two ASCAP awards, the 2019 Clocktower Award by MASS MoCA in a gala honoring her and artists Nick Cave and Bob Faust, andfellowships from the Sundance Institute as well as Paul & Daisy Soros. She has been granted residencies at MASS MoCA, The Park Avenue Armory, The Watermill Center, Florida’s Hermitage Artist Retreat, Wyoming’s Ucross Foundation, and LMCC Governor’s Island. Passionate about education, she has partnered with the New York Philharmonic and Carnegie Hall to teach at inner city schools in New York, and has worked with children in Italy, Africa, and Mexico, as well as with El Sistema in Venezuela.

Paola Prestini’s music is released on National Sawdust Tracks, Innova, and Tzadik Records. She is a graduate of The Juilliard School, and was born in Italy. She currently makes her home in Brooklyn with her son Tommaso and her husband, the cellist Jeffrey Zeigler.

Prestini is 2021 Paul Fromm Resident in Composition at the American Academy of Rome and a Sundance Interdisciplinary fellow.