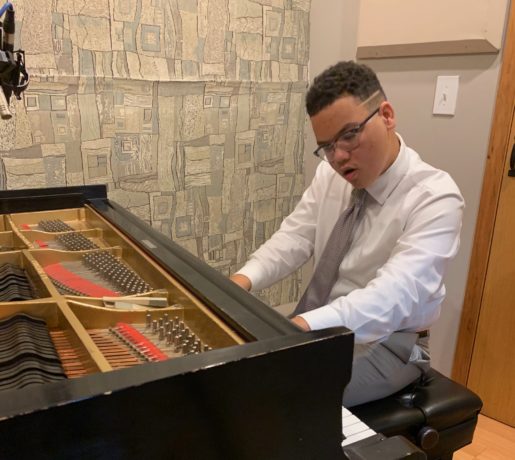 After returning from Japan where he was featured on Japanese national TV,  16-year-old Joshua Mhoon performed for the historical inauguration of Lori Lightfoot, Chicago’s first black female mayor. Last summer he performed at Carnegie Hall with The National Youth Orchestra and in Miami with The New World Symphony.

In the spring of 2018, Mhoon did a 12-day tour in Germany where he performed to a sold-out audience in Berlin. He has appeared on ABC TV’s Windy City Live TV three times and on WTTW’s Chicago Tonight. In 2013, Joshua was invited to perform for the Vice Premier of China at the Pritzker Pavilion in Millennium Park.

Joshua has performed at Lincoln Center, Carnegie Hall and Steinway Hall in N.Y. He has opened for the Jacksons, Ramsey Lewis and TV’s Nick Canon. He has played in England, France, Greece, Turkey, Austria, Germany, Italy and Spain.

Joshua is an 11th grader at Whitney Young Magnet High School in Chicago.